A laboratory where studying, drawing, designing and creating is life. The furnishings are sculptures to watch touch and use. Art, poetry, craftsmanship, technology: beauty.

Painter, sculptor, designer, cabinetmaker, Tonino Maurizi lives and works in Montecosaro, where he was born on 19 February 1940. He graduated from the Art Institute of Macerata together with enterprising and creative students such as Dante Ferretti, Valeriano Trubbiani, Francesco Bonanotte , Giorgio Cegna, Guido and Carlo Bruzzesi, Danilo Bergamo and others. A group of kids fascinated by the long wave of futurism that, with new perspectives open to art, will fuel their talent, bringing each of them to solutions that are as original as they are stylistically different. 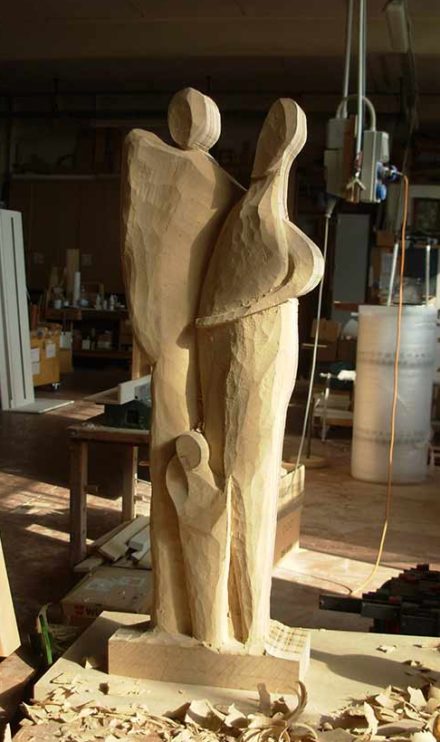 The feverish anxiety, the love of danger, the courage, the audacity, the rebellion are the essential elements that characterize these youthful years and the father’s carpentry workshop becomes a forge where to create the first sculptures and wooden artefacts. Elegant objects full of movement that reflect his feelings and that are well received by the various art dealers of Milan and Rome.

In Milan, frequenting artists and students from the Brera Academy introduces him to the world of the neo-avant-garde that allows him to make various experiments and transfer from craftsmanship to art and vice versa with an intense and fruitful exchange. But it is the encounter with Ivo Pannaggi’s extensive research that has radically changed the life of Tonino Maurizi, taking him away from his country to Switzerland, France and Northern Europe, where he comes into contact with the ideals of the Bauhaus that they introduce industrial and product design, the functionality of the object and the decoration of the interiors, trespassing from the design of the space to the scenography, the design of the environment, the fashion.

The many and varied youth experiences that led him to exhibit his works throughout Italy in the early 1960s are also the lifeblood of his entrepreneurial activity that in a few years has transformed his father’s carpentry into a company laboratory where you can think, draw, plan and create the new way of living and living in your home by creating furniture, objects, sculptures with clean lines, essentials and paintings dictated by expressive urgency full of color.

For about twenty years, alongside the company’s commitment, it has resumed an intense exhibition activity, especially abroad, starting in 2008 with Beijing (Olympic Fine Arts Collective organized for the Beijing ’08 Olympic Games) and Dhaka (at the 13th Asian Art Biennale), and recently: in 2014, in Beirut, at the International Banner Art Exhibition, and in Malaysia, at the Langkawi Art Biennale, in 2015 in Spain (ON ART OFAA), in 2016, in India (Green eARTh International Exhibition & Symposium), in Abu Dhabi, on the occasion of the celebrations for the 150th anniversary of the American University of Beirut (150 th AUB Art Collection 2016), and in Hangzhou, at the international organized art exhibition for the G20 (Hangzhou China G20 Global Arts Agenda 2016), and in 2017, at Palazzo Mora in the Venice of the Biennale, in Malaga (International Art Fair Malaga 2017), Tokyo (17th International Art Exchange Exhibition) and Beijing for the seventh Biennial International and art. Three recent solo shows: in 2014, in Macerata, organized by the Amici dell’Arte Brigade association at the Terraferma Gallery, in 2015, an anthology, in Civitanova Marche Alta (“Tonino Maurizi and the art of wonder”) and, in the 2017, in Beijing, at the art gallery Misericordina, in the artistic district 798, the heart of contemporary art.